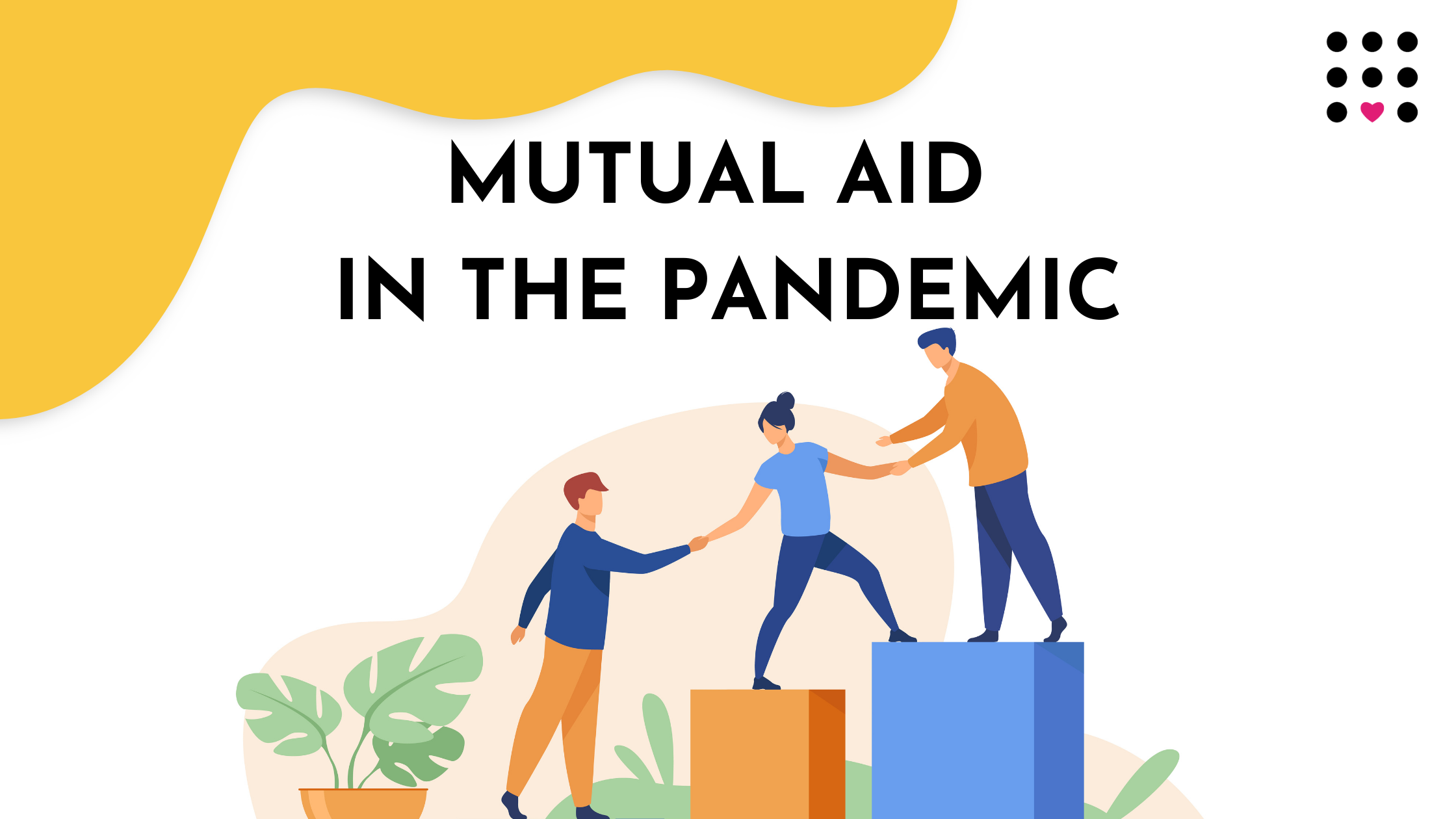 The COVID-19 pandemic has emphasised the importance of mutual aid, a practice that has existed throughout our history, primarily in marginalised communities.

What is mutual aid?

Mutual aid is an integral part of all sustained social movements. Lawyer and trans activist Dean Spade, who works towards racial and economic justice, explains mutual aid as a “collective coordination to meet each other’s needs, usually from an awareness that the systems we have in place are not going to meet them,” in his book Mutual Aid: Building Solidarity During This Crisis (And the Next). A New York magazine defines the term loosely as, “a form of solidarity-based support in which communities unite against a common struggle, rather than leaving individuals to fend for themselves.” Mutual-aid groups are non-hierarchical, with equal control over resources. They are egalitarian in nature and designed to support participatory democracy, equality and consensus-based decision-making.

This is survival work done along with demands for systemic change and justice, Spade explains. Therefore, mutual aid’s approach is two-fold: to coordinate and provide immediate relief, and to raise consciousness and fight the systems that create these crises in the first place. These approaches necessarily go together as every struggle against such colluding forces of power is long-drawn. The oppressor, whether a company, the state, university board, or all these together makes every effort to tire, demoralise, and humiliate the resistance with delays, violence, silence, threats and more. Mutual aid and care of all kinds are therefore essential to sustaining movements, and these manifest in various ways.

The term ‘mutual aid’ originates from Peter Kropotkin’s work in 1902,  Mutual Aid: A Factor in Evolution, arguing that human cooperation and not competition facilitated our survival. He also posited that the best system of economic and social organisation would be based on mutual exchanges rather than coercion and the profit-motive, as explained in this ROAR Magazine article. This reflects what BIPOC, queer-trans, disabled and other minority communities have known, which is made clearer as we face the continuous effects of colonialism, capitalism and neoliberalism – all of which not only impede but directly oppose our collective survival.

Leah Lakshmi Piepzna-Samarasinha adds key characteristics to these definitions in her powerful book,  Care Work: Dreaming Disability Justice. She sums up previous writers’ descriptions of the term as “a voluntary reciprocal exchange of resources and services for mutual benefit. Mutual aid, as opposed to charity, does not connote moral superiority of the giver over the receiver,” adding that, “White people didn’t invent the concept of mutual aid—many pre-colonial (and after) Black, Indigenous, and brown communities have complex webs of exchanges of care.” We see mutual aid in all movements, regardless of scale or issue – in persecuted Maruti Suzuki workers in Haryana organising funds for the families of their jailed comrades, the setting up community kitchens during the migrant worker crisis brought on by the government, and more.

The historic farmer’s protest against the proposed farm laws, labour codes, and the corporatisation of agriculture, as well as the anti-CAA sit-ins led by Muslim women in various cities in India, are recent examples of movements in which the process of resisting violent power structures also led to the creation of alternative modes of living together based on solidarity. Communities came together to sustain themselves, and alliances were built across struggles – not only through the powerful acts showing up together in resistance but also by meeting each other’s basic needs of food, water, safety, shelter and warmth, amongst other things. These were complemented by consistent education and information sharing across struggles through libraries, speeches, cultural events, art, and discussions.

Divorcing direct action from collective care and education in the mainstream is another way to maintain the status quo. Painting a negative picture of protesting communities through misleading headlines and misinformation campaigns is often an attempt to obstruct public solidarity. At the same time, philanthropy and charities, whose wealth is usually based on violating vulnerable communities, obstruct self-organising by donating small fractions of their wealth or offering services. Such charity is based on the idea that rich people are morally superior to poor people, and therefore deserve their privilege, while poor people brought poverty upon themselves. This tends to create dependencies to further legitimise these bodies and their wealth, and strengthen inequalities and power hierarchies in the long run. A crucial aspect of mutual aid is, therefore, self-organising and collectivising in solidarity, which is a major threat to a fascist state or company.

Why is mutual aid necessary?

There are several reasons for this. Much like with social movements in general, in the world we’re striving towards, mutual aid should ultimately not be necessary, as our rights and wellbeing would be provided for.

In India and every state that is based on oppressive hierarchies and capitalism, mutual aid highlights that the reason people are in dire circumstances is that the government deliberately abandons its duty and is unwilling to ensure the safety and health of all its citizens. Corporations and the state make profits by creating scarcity, withholding resources from the majority, while a minority are excessively wealthy, and taking away most people’s power to access these. Capital, therefore, accumulates with a few when in reality there is enough for everyone — which mutual aid shows in practice. To maintain this system as well as systems of Brahmanism, racism, ableism, and patriarchy that mutually benefit each other, the state is brutally violent towards most of its citizens, and actively works to make living as difficult as possible for them.  Marginalised communities are facing violence in all forms, either directed by or encouraged by the state. Mutual aid is required to help meet the safety, health, and economic needs of people under these conditions, while simultaneously organising to overthrow such regimes.

Dean Spade explains why mutual aid is important in our current economic system, by caring and supporting each other rather than competing and occasionally providing charity or philanthropy:

We are put in competition with each other for survival, and we are forced to rely on hostile systems — like health care systems designed around profit, not keeping people healthy, or food and transportation systems that pollute the Earth and poison people — for the things we need. In this context of social isolation and forced dependency on hostile systems, mutual aid — where we choose to help each other out, share things, and put time and resources into caring for the most vulnerable — is a radical act.” (Spade, 2020).

The crisis of the current pandemic emphasised the problems that already existed due to our economic and social systems. A myriad of issues brought about by wilfully careless state responses has led to countless deaths, severe mental distress, and economic ruin across the globe. In India,  most migrant workers with informal contracts were fired since everything was closed, many were evicted and unable to pay rent, as well as stuck without transport in foreign states in this condition. The government facilities provided in various states were of deplorable condition and several workers died in the process of making it home on foot (Chattopadhyay & Pandit, 2021).

Non-migrant street-based and informal sector workers were also put out of work, with little government support in India. Meanwhile, labour regulations were modified against the interests of employees and several businesses cut pay, exposed workers to unsafe working conditions as well as fired people at will. Across the world, people with disabilities, chronic illnesses, and other immunocompromised conditions are at higher risk and therefore further isolated at home, forced to work or otherwise be at risk. The exclusion of these groups is exacerbated by those flouting COVID rules without good reason, and influential politicians and bodies holding rallies and gatherings involving large numbers of people. COVID protocol itself was misused in India as it granted the police another way to target Dalits, Bahujans, Muslims and poor people.

Mutual aid became essential in the face of these circumstances and has been practised in various countries since. Christian Ikeokwu explores how mutual aid groups often serve as informal self-organised financial collectives, especially in areas and communities that cannot adequately access banking facilities and don’t have financial safety nets. With the soaring unemployment of the pandemic, the people who needed such safety nets the most were often those who didn’t have them. Rotating savings and credit associations (ROSCAs), informal credit like in lending clubs, informal insurance like in risk-sharing networks, amongst other collectives, become a way to address these issues through self-organising and care. These ideas are not new but play an important role in addressing survival needs during the pandemic. Meeting these needs through one’s own community is a step towards agency-taking and self-determination, that can facilitate organising for wider systemic change.

The health risks of the pandemic bring unique problems to mutual aid workers, however, collective decision-making and participation enable work to be structured according to people’s abilities without excluding anyone or placing any one aspect of the work above another. In general, it values care and support work without making it profitable and exploitative or seeing it as lesser  “women’s work” as is often the case. Examples of mutual aid during the pandemic abound beyond previously cited examples, such as the Trans Community Kitchen in Chennai, the Workers’ Dhaba in Delhi, work done by Migrant Workers Solidarity Network, Women and Transgender Joint Action Committee in Hyderabad, and more. Significantly, Hong Kong’s protest movement handled the onset of the pandemic solely through mutual aid organising, in the face of the government’s apathy and harmful policies.

Mutual aid requires group work and the elimination of internal hierarchies. However, power structures are so internalised in us that we often see them reproduced in movement spaces, such as patriarchy within communist movements, casteism in feminist movements, and similar biases that skew the movement’s priorities and decision-making, while also causing harm to its participants. Mutual aid work needs to be extremely cognizant and must work to eradicate these ingrained biases, especially in South Asian contexts where caste and gender often determine the kind of work you do and the value assigned to it. In line with these biases, it is imperative to question and eliminate the saviour mindset and ensure the work is led by the people it is meant to benefit.

Dean Spade elaborates on similar issues in detail and provides options for how to tackle them in Mutual Aid. Some of these include handling money and being wary of institutionalising the work and applying to funding organisations, overworking and burnout in an ableist culture of productivity and competition, conflict, perfectionism, and pressure.

Mutual aid is a powerful practice based on “solidarity, not charity”. It harnesses the power of people choosing to care for and help each other materially and emotionally. Doing this across movements builds crucial solidarities through understanding and forming bonds with people who do not have the same issues, and, as history has shown, creates a powerful threat to an oppressive state.

Mutual Aid and Self-Organization in Anti-CAA and Farmers’ Protests

So You Want to Get Involved in Mutual Aid

Spade, Dean (2020). Mutual Aid: Building Solidarity During This Crisis (And the Next), Verso.