Started by the Centre for Women’s Leadership in 1991, 16 days of Activism against gender-based violence (GBV) is used as an organizing strategy by individuals and organizations around the world to call for the prevention and elimination of violence against women and girls.

Each year, One Future Collective participates (OFC) in this campaign under the United Nations 16 days, which begins on November 25 (UN-designated Day for the Elimination of Violence against Women) and ends on December 10 (World Human Rights Day).

OFC is a feminist social purpose organisation with a vision of a world built on social justice, led by communities of care. We exist to nurture people’s feminist and rights-based leadership and influence their micro-communities and ecosystems to achieve social justice: through an alt school, advocacy lab and feminist justice project.

Here are the events held by OFC during the 16 days of activism:

OFC conducted a tweet-a-thon on “Trauma-informed support for Survivors of gender-based violence” in partnership with Nyaaya, Breakthrough India, Point of View Mumbai, The Gender Lab, Dream a Dream, and Gender IT. This tech-based interaction invited conversations on what trauma-informed means, and why it is necessary for the context of engaging with survivors of gender-based violence.

OFC shared a note on the terms survivor, victim, and patient/ client. The terms survivor, victim, patient, and client are used interchangeably to refer to a person who has been subjected to any form of gender-based crime. We understand that their experiences are unique and do not intend to universalise or generalise individual processes in any way. We also understand that using the word “victim” can often take power away from the individual, relegating them to the role of someone who has only suffered. On the other hand, using “survivor” in the early stages after someone has experienced abuse can deprive individuals of their experiences and harm caused with the expectation of being an immediate survivor. Alternatively, “patient or client” is often used more professionally but can be seen as detached and cold.

The tweet-a-thon highlighted multiple ways the need for being trauma-informed in everyday life, specifically with survivors of gender-based violence.

An engaging workshop on December 1, from 4 pm to 6 pm IST, was a space for exchanging thoughts, critiques and reflections on exploring Alternative forms of Justice. Discussions began with how the notion of ‘justice’ itself is unique to each individual while navigating the meaning and difference between carceral and abolitionist feminism. The exchange of dialogue paved the way to delve into the essence of restorative and transformative justice and a part of alternative justice.

The workshop ended with understanding the difference between compensation and reparation, situating various examples in the contemporary and past of India. 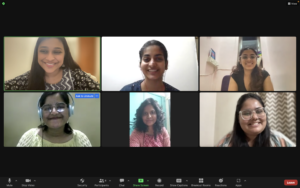 The workshop on Exploring Alternative Justice

An Instagram live was hosted on November 27, 7 pm to 8 pm IST with Shabana Praveen from Counsel to Secure Justice and Sohini from TechSakhi, POV Mumbai.

The discussion focussed on the intersectionality of GBV on online platforms, including conversations around accountability, cancel culture, freedom of expression and opinion, and current security systems in India. You can access the discussion using this link.

The panel discussion by Raisa Philip (Manager- Programs and Innovation, CREA), Samreen Mushtaq (Ashoka University) and Meghna Prakash focussed on how women and other sexual minorities are seen as a threat to structures that governments go out of their way to stifle dissent, how identities interact with fascism and its effects on a community, and the socio-cultural barriers that exist in India.

17 folks were part of this discussion. 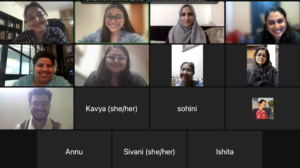 It is essential to include everyone, as a community, when we talk about GBV. Due to their identities, cis-men and boys often may not get this space. On November 30 from 6.30 pm to 7.30 pm IST, Devanik Saha facilitated a conversation space for cis-men and boys addressing GBV with them.

The colourful language was a community space for folks, mainly survivors of GBV,  to come together and use art as a medium of reflection and joy. On November 27, individuals from multiple cities met online to foster this space with a sense of togetherness, community, and care. 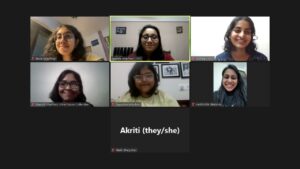 On December 10, from 6.30 to 8 pm IST, Vishakha Shivkumar facilitated a space on Dance movement and Music Sharing. The only rule was to dance like no one is watching, and to shake it off! The session ended with folks making a collaborative playlist to listen to and enjoy, and an OFC community member trying and sharing their tunes on a guitar for the first time.

The language of activism can have multiple forms including songs, poems, graffiti, and more! On December 2, from 6 pm to 7 pm IST OFC facilitated a community space on navigating art and alternative mediums to activism in today’s world. From reflective tools to studying the history of types of dissent (for instance right from the times when India was under colonial rule to now, poems have been a strong force of activism), the space welcomed discussions and encouraged sharing different platforms where folks have come across activism. This included Hannah Gadsby’s “Nannette” to Faiz’s “Hum dekhege”.

OFC launched the study on Gendered Household and Care Work in Urban India on December 10. Historically, the division of labour for household chores and care work has been gendered, where women have to contribute significant time towards this activity. The onset of the COVID-19 pandemic has shown a significant hike in the amount of time spent on household work. OFC conducted a study examining the incidence and impact of gendered differences in time spent on unpaid care work before and during the COVID-19 pandemic, specifically between 25th March – 31st May 2020, in India.

Our key findings indicate that women performed significantly more unpaid care work both before and during the pandemic. We also identified ways in which tasks were gendered through the assignment of ‘masculine’ and ‘feminine’ values.

You can access the study here: Gendered Household and Care Work in Urban India Study | One Future Collective

OFC believes in the power of conversations as a driver for social change. To this day, domestic violence is a topic that is not openly discussed.

In light of this, we hope that these cards can serve as anchors for you to initiate conversations in your communities, for addressing domestic violence and ideate on building trauma-informed pathways to support survivors.

Such conversations can become the beginning of change and inform the actions of individuals, communities, and over time, systems.

You can sign up for free and access the conversation cards here: Get a Digital Copy of Domestic Violence Conversation Cards [One Future Collective]

OFC re-launched the self-paced course on Economic Violence as Gender Based Violence on November 5. This online course explores

33 participants are part of this course.

We also launched the Social Justice Zine “Where do we go from here”s first edition on “The Culture of obedience”. You can access it here: Get a Digital Copy of Where Do We Go From Here Zine – An Interactive Magazine [One Future Collective]

Often as we grow up with multiple agencies of socialization, we may internalize discipline and obedience, on an individual and socio-cultural level.

The zine unpacks how obedience is defined, rewarded, and what it looks like as an experience. You’ll find community insights into various institutions including schools, media and religion.

The zine ends with a reflective and interactive toolkit.

It can be accessed by filling out this form: bit.ly/SignUp-SocialJusticeZine-OFC

This zine is a part of the “Where do we go from here” series, a community-driven space- stringing together pieces of our stories, everything from the rugged edges to the softest centres.

This resource is curated by Shefali Gupta & Vandita Rungta

OFC launched its pilot Peer Support Program on December 9, which will go on till January 6.

Taking cognizance of the stigma and socio-cultural barriers to seeking mental health support in the country, most people may feel more comfortable talking to a familiar peer than a professional stranger. Since providing peer support emphasizes treating everyone as an equal, it reduces the chances of having a power dynamic between the sharer and the listener. Thus, it does not limit an individual’s mental health to their personal responsibility; it finds value in relations as a way to bring about transformations. It views the sharer-listener relation as a partnership that inspires learning and growth. 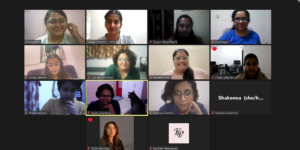 The cohort of the Pilot Peer Support Program

OFC held a workshop followed by a sharing circle on Invisible forms of GBV at K.C. College, Mumbai. Additionally, we facilitated a session on Gender sensitization for the crew members of Tiger Baby Films. 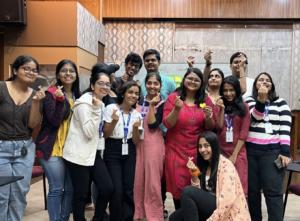 Meanwhile, we have some enriching Cohort Based Courses scheduled for the coming year, you can read more about them here: Curriculum Outline | CBLP | One Future Collective – Google Docs